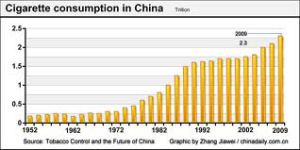 China has the most smokers in any country (about 300 million) and accounts for 40% of global tobacco production and consumption. High tobacco use is linked to an average of 1·2 million deaths annually in China, 100 000 of which are caused by exposure to second-hand smoke. Previous efforts to ban smoking in public areas in China have had little success. In 2011, locally regulated guidelines were issued banning smoking in indoor public places, and signs prohibiting smoking are commonplace in restaurants and bars. However, poor enforcement and few penalties for non-compliance mean that the rule is widely ignored. Consequently, smoking in public remains widespread, and up to 70% of adults are regularly exposed to second-hand smoke.

Det anerkjente britiske legeskriftet, The Lancet sier: The new rule suggests government commitment to the issue, but it needs to be a step towards a national ban on smoking in public places. Moreover, it might be difficult to implement. According to the Chinese Association on Tobacco Control, 61% of male Chinese civil servants smoke, more than half of who say they have never tried to quit, and up to 60% of doctors in China are smokers.