Thursday the UN organizations in Norway summed up their inputs to new goals after 2015. The Beauty of the UN Beast is that it is the only entity that can make goals for the whole world.

For over a decade, the Millennium Development Goals (the MDGs) have been a guiding force. They have changed the lives of people around the world. But now they are coming to an end in 2015.

Much progress has been made, but much work remains. The world is heading in the right direction, but it is still too early to light the candles.

We need to finish the MDGs and complement them. 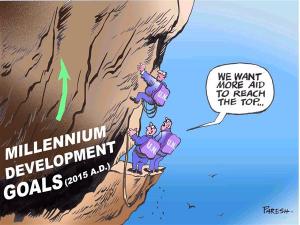 One year ago the UN organizations in Norway kicked off a national consultation on new development goals (Post-2015 Agenda). 15 seminars have been conducted and the organizations have received almost 40 written inputs to their report. Here is the summary of the summary report:

• A development agenda that includes ambitious and universal goals.

• Targets and indicators for each development goal should be defined at international, national and local levels.

• Implementation of national strategies in every state, including Norway. UN National Development Assistance Framework will be crucial in the developing countries.

“As a rule, governments monitor people” said Ivan Krastev, Bulgarian scientist. The UN organizations underline the importance of the people monitoring the governments.

Therefore they call for a:

• A stand-alone goal on open, accountable and inclusive governance with commitments to ensure participation of civil society and grass- root movements.

• Monitoring mechanisms and peer-to-peer reviews at an international level for example after the model of the Universal Periodic Review in the UN Human Rights Council. But also on a national level. In Norway we have institutionalized this in many way through parliamentary hearings, but still need to improve. In other countries there could be a need for post-2015-specific mechanisms like the reviews in the HRC, but on a national level.

• It is recommended that national strategies are developed, that include clear national targets and measurable indicators. In that way it would be easier to measure the new goals on a national level.

Everybody except the most ambitious global goals ever seen. Reaching more people than ever before. At the same time there has been a decrease in public funding to Development programs for the first time since the 1990s.

To make sure that the ambitions not turn into shadows of a dream there is a need to think innovation in fundraising:

• The first tax carried out by the UN: Implementation of a UN tax on financial transaction or a UN environmental tax

• Prevent illicit capital outflows from the south to the north

In the report there are many detailed proposals for goals, targets and indicators. But the most important issues raised throughout the consultation is the integrated approach of environmental, economic and social Dimensions to new goals. Challenges underlined throughout the report are extreme poverty, increasing inequalities, the impact of climate change and to Ensure a human-rights based agenda. There is a special focus on women’s rights, persons with disabilities and gay-rights/LGBT. The consultation highlights the following subjects as the most crucial and asks the Norwegian government to engage in them in the post-2015-debate:

Norway should develop a national strategy to ensure the implementation of new goals in Norway. It should include mechanisms for effective involvement of national actors, such as the civil society and grassroots movements at national and local levels.

The national goals, targets and indicators could be developed amongst others on the basis of recommendations from the UN, international human rights institutions, complaint mechanisms.

In the report the organizations include examples of national targets and indicators like:

• the amount of children living in poverty   • mental health care and adequate treatment.

• detention of children in conflict with the law.